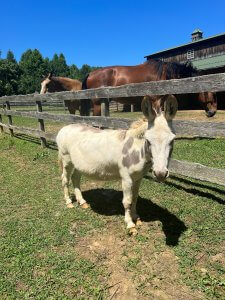 Waffles the mini donkey has become the official mascot of Island Creek. His journey to stardom began when he was rescued from the New Holland kill pen by a very kind lady. She was looking for a companion for her Quarter Horse, Noah. Waffles, healing from a previous back surgery and being treated for a respiratory infection, became best friends with Noah. When she was no longer able to care for Noah and Waffles, they were adopted by their current owner, a member of the Island Creek corporate team. Waffles’ star quickly rose among his fans in the office.

Waffles, and his big brother Noah, enjoy a quiet life on a small farm in Southern Maryland. Waffles rules the pastures with an iron fist but takes time in his day to enjoy the smaller things in life; rolling in the sandpit, sleeping in the sun, checking people’s pockets for treats, and eating carrots. Friendly and charismatic, Waffles enjoys his role as the brand ambassador for Island Creek.